Report: States trying to boost college attainment are missing millions of students among the incarcerated

Report: States trying to boost college attainment are missing millions of students among the incarcerated

A new report on helping incarcerated people obtain the education they need to improve their lives and avoid further contact with the justice system shows how much progress we’ve made – and how states could be doing so much better.

This Lumina-supported study was needed because too little information is available about states’ educational policies and investments. Among other things, the report shows how a lack of coordination among agencies – corrections, higher education, and workforce has hampered efforts to advance education for this population.

So, in partnership with the Council of State Governments Justice Center, we’re pleased to release “Laying the Groundwork: How States Can Improve Access to Continued Education for People in the Criminal Justice System.” This report does exactly as it says; it lays the groundwork for future action by showing us the present very clearly.

CSG Justice Center conducted a review of existing statutes and surveyed all 50 state correctional and parole-granting agencies across four key areas of policy:

The study reveals that no state has addressed all of these policy areas. While that doesn’t diminish the often-exceptional work in prison-based education programs and in community re-entry organizations, it does point to one conclusion: states need to step up.

The report also describes how states have, to varying degrees, hampered their own efforts. Forty-three have publicly stated postsecondary attainment goals, but few are close to meeting them. And all the states have created significant barriers to ensuring that the more than 2 million people currently incarcerated, more than 4 million on probation or parole, and the millions more with criminal backgrounds have access to high-quality postsecondary education.

Further, incarcerated people who participate in education programming have been shown to be 43 percent less likely to return to prison. For every $1 spent on prison education, states saved $4-5 in incarceration costs alone, excluding taxes, reductions in benefits use, and civic contributions. Supporting postsecondary access for incarcerated and re-entering people isn’t just the right thing to do; it’s the smart thing to do.

We hope states will use this report to take important steps to lay the groundwork: assessing where barriers exist and removing them; understanding where opportunities are, and moving on them; and ensuring that those affected by the correctional system can pay their debt to society and become contributing members of it.

Back to News
More on education in prison
By Strategy: Prison Education 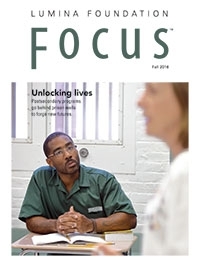